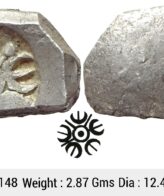 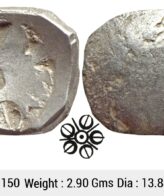 Ancient, Archaic Punch Marked Coinage, Attributed to Gandhara Janapada, Silver 2 Shana or 1/4 Shatamana, 2.65 gms, 12.58 x 17.13 mm, “Local Swat Valley” type, Single 5 armed symbol on obverse, a Very Rare denomination as compared to the larger Bent Bar, Five armed symbol instead of the usual six armed symbol. This type too is found only in the Swat valley. It is argued that the denomination and weights of this type are somewhat different and perhaps could be attributed to Kamboja Janapada?, punch with 5 arms instead of the regular issue of Gandhara, which always has 6 arms (Rajgor-561 to 567), said to be from a small hoard discovered about 12 years ago, An alternative attribution is that this is not Kamboja Janapada, and is instead a rare variety of Gandhara with a 5-armed symbol instead of 6-armed (Rajgor-561 to 567), The ancient Kingdom of Gandhara was one of the original sixteen Mahajanapadas (“Great Kingdoms”) mentioned in ancient Buddhist texts like the Anguttara Nikaya. Gandhara, centered around the important ancient cities of Purushapura (modern Peshawar). Takshashila or Taxila, and Pushkalavati (the capital of the Kingdom) and covering the regions of northern Pakistan and eastern Afghanistan, though on occasions it extended as far as Kashmir, See Fishman, JONS 202, Fig. 5, Uniface, Unlisted, very fine, very rare. CPBS 149